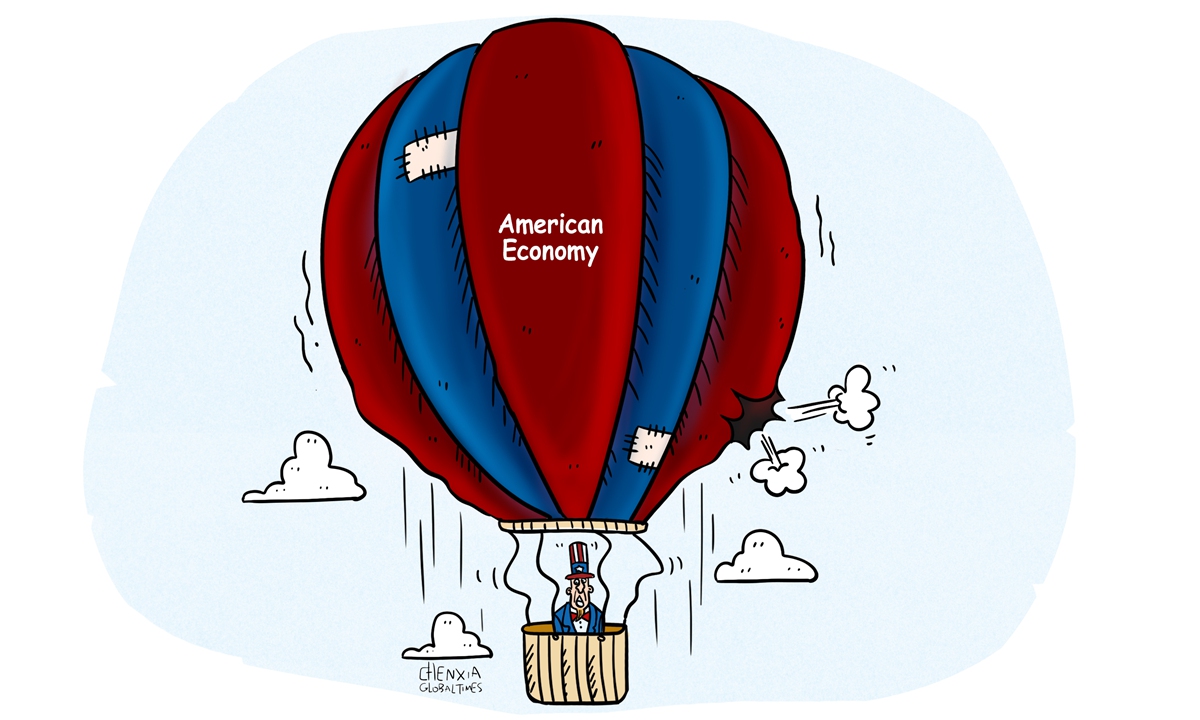 The US government reported that its economy grew 6.5 percent on an annualized basis from April to June in 2021 – about two percentage points lower than what was forecast by most economists. Obviously, the much-vaunted strong recovery from the deep recession in 2020, caused by Donald Trump’s porous measures to deal with Covid-19, has hit a snag.

It is safe to say the world’s largest economy is facing serious problems, although the US Federal Reserve and the Biden administration won’t admit the scale of the challenge. Over-flooding the country’s financial system with fiscal stimulus as well as the Fed-printed liquidity has truly buoyed Wall Street with the stock indexes skyrocketing for many months, but it has largely failed to fire up the US economy to accelerate, consistently.

A negative side-effect of the over-flooding policy has now emerged, as inflation is rapidly raising its ugly head, starting to eat into the purchasing power of millions of middle class and poor American households. The consumer price index surged to 5.4 percent in June from 5 percent in May – more than twice of the 2.5 percent benchmark reportedly allowed or tolerated by the US central bank.

The current US economy is not built on solid foundations. Consumer spending is peaking, but service sectors remains depressed. Wealth is being concentrated among the small group of top 1-percent super rich families. To make things worse, Americans’ personal savings rate dropping sharply, tumbling to only $1.97 trillion at the end of June.

Facing a resurgence of the Delta variant of coronavirus from America’s south to north and constantly growing new cases of infection, hospitalization and death, many state and city governments are again announcing stricter social distancing rules, though full-blown lockdowns are unlikely. The new Delta wave will likely inhibit the continued US economic revival, battering the reemergence of the services sector, outdoor sightseeing, dining, sporting and entertaining activities in particular.

Acknowledging Delta’s danger, US President Biden, concerned about next year’s mid-term elections, is urging for more stimulus measures and Democrats in the US Congress are working a new round of a massive $3 trillion coronavirus relief bill. Even if one half of that spending plan is approved finally, the financial system will be inundated with an even higher level of liquidity, which will inevitably drive up the country’s inflationary pressure.

If that stimulus is not able to push up the economy’s growth rate, hyper-inflation will be coupled with lower growth – which economists call “stagflation”. Once the nightmarishly “stagflation” takes root in the US, Biden will have to count down his days in the White House.

It’s a fact that the US is now witnessing a decelerating growth, with the July-December growth spiraling down to mid-single digits, at around 4.5 percent. In 2022, the growth will likely retreat further to low-single digits at around 2.5 percent. If the Federal Reserve is forced to wind down high inflation by raising the interest rates, the growth rate could be even lower, in addition to a dampened stock market.

As things currently stand, it is difficult to fathom the extent of the US slowdown. Whether the economy will retreat at an accelerated pace, and the level of GDP output trend lower than it was in the fourth quarter of 2019, is not known, either. But it is up to President Biden’s economic team to give it a quick diagnosis, and take due remedies.

But the warning bell has already been heard in the distance. Trump’s unprecedented tariffs and technology war with China, which has been ongoing since March 2018, has severely disrupted global trade, causing disruption to crucial supply chains and wild swings in prices. Take timber and semiconductors for examples, Biden’s economic team could ask why American property developers substantively reduced their investment on homes, and why Americans rushed to snap up used cars and used trucks while new autos cannot be produced for a severe shortage of microchips.

Residential housing investment slowed in the US in the second quarter as fast-rising home prices and tight inventory weighed on the real estate market, with the category shaving off up to 0.5 percentage points from headline GDP, reported the US Department of Commerce. If builders cannot procure lumber, drywall, appliances and the like at affordable prices, they won’t build houses.

If the Biden administration continues to follow his predecessor’s confrontational policy towards China, or places more Chinese companies on its trade blacklist, the destruction to the US economy will only speed up, with inflation to continue spiraling up.

The economic reasoning is crystal clear. China is now the world’s hub of supply lines, backed up by China’s large corps of experienced, diligent yet inexpensive labor force, all other economies, big or small, benefit trading with the hub.

Look what the US government is doing now – it has put in place high tariff barriers and barring Chinese enterprises from getting US technology, the results are well-known to the world, the prices in the US are welling up, and private manufacturers there are scaling back investment.

And, quite ironically, China’s exports to the US have kept expanding despite the punitive tariffs. Seen from another angle, the US government’ huge stimulus money is attributing to China’s GDP. Biden’s administration pumped $1.9 trillion in Covid-19 relief into the US economy in March, bringing the total amount of government aid to nearly $6 trillion since March 2020. Millions of US households received stimulus checkbooks from Biden, triggering a shopping spree.

China is a global hub of all kinds of manufactured goods as well as a giant consumption market, no economies will achieve growth by cutting its exposure to the hub, the US included. When China’s economy roars, it will lift all the boats, except those taking initiative to “isolate China”– which always ends up isolating and hurting themselves.

The author is an editor with the Global Times. [email protected]

Tue Aug 3 , 2021
SINGAPORE, Aug. 2, 2021 /PRNewswire/ — Telkomsel, Indonesia’s largest telecommunications services provider, has selected Thoughtworks to evaluate its existing infrastructure and provide a roadmap to support its transformation. The collaboration will focus on redefining the approach and framework that is expected to optimize agility, improve resiliency and enable Telkomsel to […]