If you have amassed a large or even small fortune in your 401(k) retirement plan at work, an important decision eventually awaits: What should you do with the money when you retire or otherwise leave the company?

One quandary is whether to keep the money in the company retirement plan (if that option is available) or roll it into an Individual Retirement Account to maintain your tax-sheltered status for a while longer.

It’s obviously a key issue for those heading into retirement but it also affects a lot of younger people who voluntarily leave for various reasons. They, too, face 401(k) rollover decisions.

Reflecting the magnitude of this decision, the U.S. Department of Labor, which oversees many types of retirement plans, has issued new rules that affect financial advisers and their clients. The regulations are complex and largely beyond the scope of this column. But they focus on potential conflicts of interest and what obligations your adviser owes you to help make a wise choice.

“The decision to roll over assets from a plan to an IRA is often the single most important financial decision a plan participant makes, involving a lifetime of retirement savings,” the department said in a lengthy explanation of the new guidelines. The intent of the rules is to “promote investment advice that is in the best interest of retirement investors.”

Even if you don’t work with a financial adviser, the issues raised can help guide you in pursuing a better rollover outcome.

►Your retirement savings could take a hit: What you need to know about taxes

►How good are you with finances?: Take the quiz

Rollovers are movements of money from one tax-sheltered plan into another, especially switches from 401(k)-style accounts into IRAs. There’s no requirement to roll or transfer money from a workplace plan into an IRA held at a brokerage or other custodial firm when leaving a job, but it’s often the best option as you can continue deferring taxes.

Also, with a brokerage IRA, you often have a wider choice of investments compared to what’s offered in your workplace plan. Other common reasons to make the switch include not wanting to leave assets behind at a former employer and wanting to consolidate assets.

American households as of mid-2020 held $10.8 trillion in IRAs, representing 34% of all retirement assets, according to a recent report from the Investment Company Institute, a mutual fund trade group. However, only about 12% of households contribute new money to traditional or Roth IRAs, the report added, meaning rollovers and investment gains account for most of the increases in these accounts.

“Rollovers from employer-sponsored retirement plans have fueled the growth in IRAs,” the institute said.

The new Department of Labor regulations, which took effect in February and likely will be enforced starting in December, seek to prohibit advisers from receiving payments from third-party investment companies that create conflicts of interest when dispensing rollover guidance.

In other words, not all advisers are fiduciaries who put their clients’ best interests first.

“That’s what this rule is trying to make clear,” said Alan Norris, an Arizona-certified financial planner and a fiduciary for 401(k) plans. As of December, advisers handling IRA rollovers will have to assert in writing that they are indeed fiduciaries, he added.

When advisers act as fiduciaries they must, among other things, disclose conflicts of interest, offer prudent advice, charge reasonable fees, disclose why rolling money into an IRA is in your best interest and act with undivided loyalty (meaning an adviser can’t put his or her interests ahead of yours). For “prudent” advice, advisers are supposed to provide guidance and exercise judgment as other knowledgeable, impartial professionals would.

When the new rules are enforced, some advisers might stop handling IRA rollovers because they won’t be able to meet the higher standards of a fiduciary, Norris said.

Fees can be another source of conflict

Fees and expenses are a key potential source of conflict.

“Financial institutions must be careful not to use quotas, bonuses, prizes or performance standards as incentives that … are likely to encourage investment professionals to make recommendations that are not in retirement investors’ best interest,” the department said. Investment companies including brokerages, banks and insurers “should aim to eliminate such conflicts to the extent possible, not create them.”

As an example provided by the department, suppose you want to roll $100,000 from your 401(k) into an IRA, and suppose that an investment company affiliated with your adviser pays him or her 1% annually to steer you into its investments. Assume, further, that this fee difference cuts your average return to 5% annually from what would have been 6% otherwise. Over 10 years, at 5%, your initial $100,000 balance would grow to $163,000, compared to the $179,000 it would have risen to if earning the full 6%.

“In other words, that extra percentage point in fees would cost you $16,000, and as more time passes, that 1% difference in fees gets magnified,” the department said. “During the next 10 years, your IRA would lose out on another $39,000.”

The new guidelines still allow 12b-1 fees, commissions and other costly means of compensation, but advisers acting as fiduciaries will need to demonstrate how their rollover recommendations are still in a client’s best interest, Norris said.

How to avoid taxes on rollovers

Whether or not you’re working with an adviser on a rollover, it’s important to have a basic understanding of how to move money from a 401(k)-style plan into an IRA.

Alternatively, you can have the money paid to you first, then reinvest it into an IRA later. Because you take possession of the money, you can use this as a short-term loan, provided you repay it in a timely manner by reinvesting in an IRA.

However, you must complete this type of rollover within a 60-day window. If you don’t, any money not reinvested is treated as a permanent distribution, triggering ordinary tax and a 10% penalty if you’re under age 59 and a half.

Be aware, also, that employers must withhold 20% of the potentially taxable amount that you received. To avoid taxes and a possible penalty, you would need to come up with that 20% from somewhere else within the 60-day window.

Rollovers aren’t especially complicated, but it’s important to do them right. That’s why the department is taking a closer look a how financial advisers are handling them.

Reach the reporter at [email protected].

Crypto is reshaping the world economy, 50 years after Nixon ended the dollar’s peg to gold. Here’s how some are playing it

Wed Aug 18 , 2021
Is the global economy steering toward a Bretton Woods for the digital-currency age? Sunday marks the 50th anniversary of what has been described as the dropping of a “monetary bombshell” on the world financial system, when President Richard Nixon announced that the U.S. dollar would no longer be pegged to […] 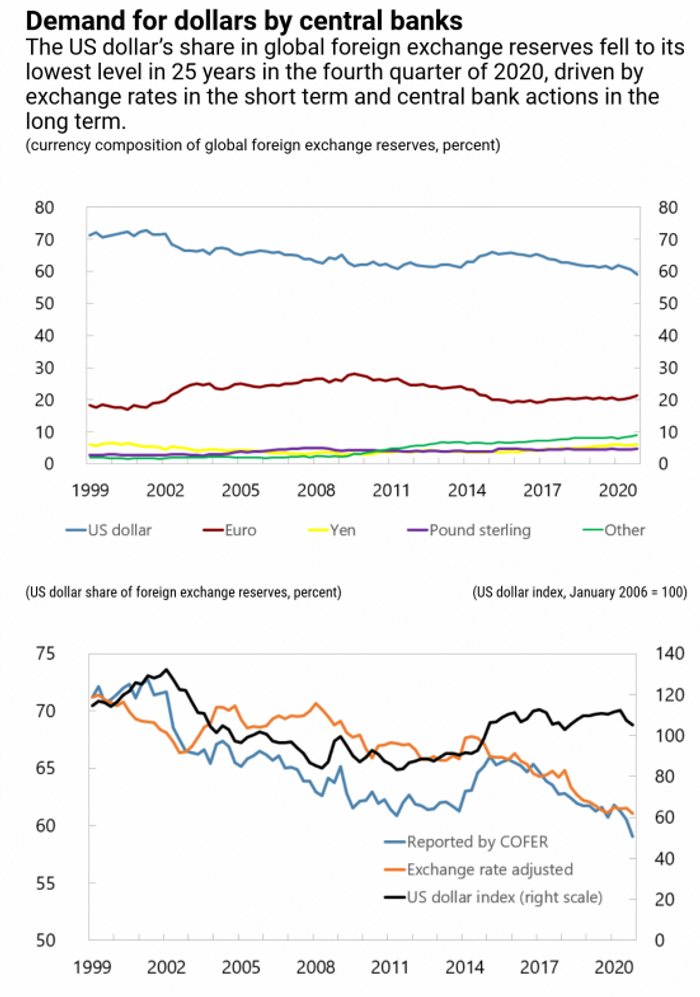