Ali Carnegie, a business energy broker based in south-west England, spends most of his working day on the phone breaking bad news to clients.

In normal times, Carnegie wrangles with gas and electricity providers over single-digit percentage increases in the bills of the more than 250 small to medium-sized enterprises he has on his books. But now he has to recommend contracts that may tip some of his clients’ businesses over the edge as energy bills have started to rise sharply, driven primarily by Russia’s squeeze on gas supplies to Europe.

Last month, a hospitality business he works with was offered a new electricity contract priced at £605,000 a year, a seven-fold increase on its previous one. The owners are now working out whether their business can survive the rise.

Spiralling energy costs are just one of a number of pressures weighing on the UK’s 5.5mn small businesses. “This winter would be very grim if energy prices alone were going up,” said Carnegie, who runs Cornwall-based consultancy Total Energy Solutions.

Increasing wage bills, higher raw material costs, the supply chain crunch and the fallout from Brexit only add to the pressures. The upshot is that many SMEs, which together employ around three-fifths of the UK workforce, will probably collapse without government intervention.

In 2020, the first year of the pandemic, the UK lost nearly 390,000 small businesses, more than one-20th of the total. Tina McKenzie, policy chair at the Federation of Small Businesses (FSB), predicted that this winter “could easily be just as devastating . . . if not worse”.

In the three months to June 30, SMEs in the hospitality, manufacturing, construction and retail sectors all reported input costs almost double the level of the same quarter last year, according to the FSB Small Business Index.

Over the same period, 5,629 company insolvencies were registered in England and Wales, 13 per cent up on the previous quarter, according to official data.

“The government’s got to wake up to the fact that there’s a real crisis facing small businesses,” said Andrew Goodacre, chief executive of the British Independent Retailers Association. “If you lose businesses, you lose high streets, you lose jobs and you lose livelihoods. That’s hard to recover from.”

Industry groups have called on ministers to help small businesses with their energy bills through the winter and provide an uplift in the threshold for full business rates relief.

Both candidates in the race to replace Boris Johnson as prime minister have made limited commitments that would help small businesses. Frontrunner Liz Truss has promised to scrap the planned increase in corporation tax, while Rishi Sunak has committed to extend the 50 per cent business rates discount.

A government spokesperson said: “No national government can control the global factors pushing up the price of energy but we will continue to support business in navigating the months ahead.”

Last week, as temperatures rose again, family-owned Cornish ice cream maker Roskilly’s celebrated its best day of trading since it began selling the treat 35 years ago. But the outlook is less sunny.

The wage bill for its 60 staff is up 10 per cent and the company has been turned down for contract renewal by its energy provider, which risks leaving it at the mercy of fast-rising variable tariffs come October.

Producing and freezing 400,000 litres of ice cream a year is an energy-intensive enterprise. With 4 per cent margins on a turnover of around £2.3mn a year, the company is heading for a big loss.

“The staff are all terrified because they know if I don’t have the money, I might have to cut hours or jobs in the winter, if we even make it that far,” said Silke Roskilly, one of the directors.

In the energy market, small businesses have been “thrown to the wolves”, the FSB’s McKenzie argued. While consumers benefit from some protection from the energy price cap and state financial support, and larger corporations can hedge against rising energy costs, SMEs are “an easy target” for suppliers, she added.

“If you’re an energy company, where are you going to get your big hikes? Small businesses, because there’s no protection whatsoever,” McKenzie said.

An especially tight labour market has conspired with rising energy, food and drinks costs to hit the hospitality industry particularly hard. The food and accommodation sector has an 8 per cent vacancy rate, the highest of any industry, according to the Office for National Statistics.

Earlier in summer, Anthony Pender, co-owner of Yummy Pub Co, which has three sites in London and south-east England, was so short-staffed he was pulling pints himself. Now, staffing levels are up but the company’s wage bill has increased from 26 to 31 per cent of turnover. Its biggest draught lager supplier has put prices up by a quarter and the electricity bill has doubled.

“We just can’t pass on those costs as we’ll have no customers left,” said Pender. He warned that over the winter he may have to reduce trading hours, cut back the menu and lay off chefs to save money, adding that he was already seeing the “tell-tale signs” of recession.

“I think we’re heading towards a catastrophic market event. Our business will survive on £5mn turnover, but how do Dick and Rita at the Dog and Duck turning over a few thousand a week survive?”

Yummy Pub Co has four months’ worth of cash reserves to draw on — a rarity for businesses in the sector where most cash piles were depleted by the Covid-19 pandemic. One in six hospitality businesses has no reserves, according to the trade body UKHospitality (UKH).

The British Institute of Innkeeping calculates that independent pubs will need to trade 20 per cent above pre-pandemic levels just to stand still, but 86 per cent are reporting profits down on 2019 levels.

“Not all businesses will be able to survive this onslaught, and those that can will be closely considering how they can keep their costs down just to stay afloat,” said Kate Nicholls, UKH chief executive.

In the coastal town of Lymington in southern England, Raoul Perfitt, managing director of organic hair dye manufacturer Herb UK, is also trying to work out how to make it through the winter.

Post-Brexit, the increased cost of exporting to the EU, which accounts for a fifth of revenues, had already cut into margins. But in recent months the price of essential raw materials has increased dramatically, in some cases as much as five times.

The company, which employs more than 50 staff in the UK and turns over £7.5mn a year, has also been hit by a three-fold increase in electricity costs. Fortunately, Herb moved to a new, more efficient premises in January. “If we were still in the old unit, it would have been horrendous,” said Perfitt. “We’ve invested heavily in more efficient heaters, smaller production units . . . so we’re trying to mitigate everything we can.”

As they steel themselves for a sharp downturn over the winter, many small businesses are left wondering how much help they will get from the new UK prime minister with the leadership contest creating a policy vacuum.

“It feels like we’re on a pause button, whilst everybody spirals into a winter of discontent,” said the FSB’s McKenzie.

Mon Aug 15 , 2022
The brutal GDP report released on July 28, showing the economy had contracted for a second quarter in a row, led some to insist the much-feared recession had already arrived. And in some ways that makes sense: Since 1948, every period of back-to-back quarters of negative growth coincided with a […] 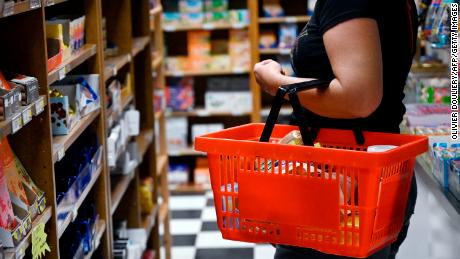