Job growth at small businesses spiked in July across various industries and parts of the country, according to payroll giant Paychex, with hourly earnings also improving.

The Paychex | IHS Markit Small Business Employment Watch, released Tuesday, indicated the second strongest one-month increase in the Small Business Jobs Index since 2010, the period of recovery following the Great Recession with 0.85% growth in July. At 99.36, the small business jobs index is up more than 1% over the previous quarter and 5% compared to last year, pointing to a significant recovery from the economic downturn. Hourly earnings growth grew to 3.11% in July, up from June’s increase of 2.84%.

The figures point to a strong economic recovery this year despite the ongoing COVID-19 pandemic, although the increasing number of infections from the highly transmissible Delta variant is threatening businesses with new restrictions as more cities and states try to contain the spread.

“Our national index jumped to the highest level since the summer of 2019,” said Frank Fiorille, vice president of risk management, compliance and data analytics at Paychex. “Some of that is due to base comp. Last year was a lower bar, but there’s definitely some organic growth this month. It looks like hiring at small to medium-size businesses has picked up. We’re very encouraged and feel like it could even get stronger as the fall comes around, with the confluence of things with hiring starting to be rolled back, whether it’s the unemployment insurance, schools opening back up, or people just feeling more comfortable, although obviously now with the new Delta variant, that could throw a wrench into everything.”

“A lot of the growth was really centered in the leisure and hospitality sector,” said Fiorille. “That continues to ramp up really strongly. Wages are starting to go up, especially in the leisure and hospitality segment. We track new hires at these establishments, and the wages are really rising pretty fast as well as signup bonuses, competition to get people to come to work.. All regions were up, and the Northeast was up pretty strongly.”

Weekly hours worked growth slowed for the fourth consecutive month, however, from 0.52% in March to -0.58%in July. On the other hand, weekly earnings growth increased to 2.45% in July, up from a two-year low of 2.34% in June.

Fiorille advises accounting to keep their small business clients informed about the latest changes. “Depending on where the accountants and the businesses are located, it seems like states are doing more stuff,” said Fiorille. “In New York, for instance, there’s a separate restaurant grant program that just launched, as well as child care programs. You have to watch what’s going on not only at the federal level, but the states are doing their own different things.” 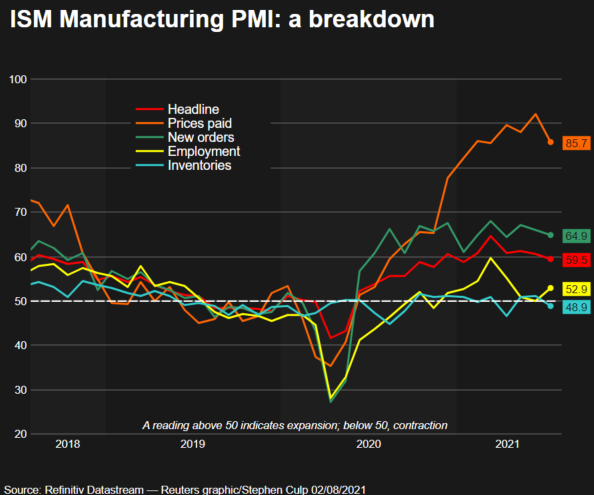