Reliance Industries (RIL) Chairman Mukesh Ambani didn’t get any salary for the year 2020-21 in the wake of the Covid-19 pandemic, the company said in its annual report on Wednesday. In his note to shareholders, Ambani said the COVID-19 pandemic disrupted several lives and dealt a severe blow to the economic health of the nation. Among managing directors and whole-time directors, Nikhil R Meswani received total remuneration worth Rs 24 crore and Hital R Meswani also got equal remuneration at Rs 24 crore. PMS Prasad received the annual compensation of Rs 11.99 crore while Pawan Kumar Kapil Rs 4.24 crore. Both of them received commissions worth Rs 17.28 crore each, which comprised a major chunk of their compensation.

Despite not taking any salary in 2020-21, the Asia’s richest man has seen consistent rise in his net worth. In the past one week, his wealth surged $6.2 billion to $83.2 billion, Bloomberg Billionaire Index shows. Amabni holds 49.14 per cent stake in Reliance Industries.

Ambani had kept his annual salary from his flagship firm capped at Rs 15 crore for 12th year on the trot in FY20. He kept salary, perquisites, allowances and commission together at Rs 15 crore since FY09 till FY20, forgoing over Rs 24 crore per annum.

The company had also announced cuts in salaries of employees in FY21 in its oil and petrochemical business as record fall in fuel sale amid lockdown reduced revenue of the company. The company had also deferred bonus payments for the year ended March 31, 2020.

The salary cuts were rolled back later and the company announced a payment bonus to employees of its hydrocarbons division in October 2020. The company also offered an advance 30 percent of the total variable pay from the next year’s salary to its employees as a “goodwill gesture”.

Mukesh Ambani, in RIL’s annual report, said from Day 1, Reliance has adopted a multi-pronged prevention, mitigation, adaptation and ongoing support strategy to fight the pandemic. “Overall, Reliance is supporting the set-up and management of over 2,300 beds across various locations,” he said.

He said in a volatile environment, Reliance generated an EBITDA of Rs 97,580 crore (US$13.3 billion), which is 4.6 percent lower than last year. “Diversified earnings streams and resilient consumer businesses helped the company navigate through the unprecedented pandemic headwinds,” he said.

Notably, the company had recorded a consolidated net profit of Rs 53,739 crore (US$7.4 billion) during the year, registering a growth of 34.8 percent y-o-y. He said strong operating cash flow and largest ever capital raise further strengthened RIL’s balance sheet, enabling the firm to deleverage and meet its net-debt zero commitment ahead of stated timeline.

“During the year, RIL made pre-payment of US$7.8 billion of long-term foreign currency debt, with requisite approvals from the RBI. This is the highest ever prepayment of debt undertaken by any corporate borrower in India,” said Ambani.

Ambani also expressed his deepest gratitude to scientists, doctors, nurses, police, volunteers and many others who are waging the battle against COVID-19. “We all owe a great deal to them. I am confident that we are going to ultimately win the fight against COVID-19,” he said.

Thu Jun 3 , 2021
As part of its continued efforts to develop monetization tools for WhatsApp, Facebook has today announced some new updates for its WhatsApp Business API that will help facilitate a broader set of brand use cases. First off, Facebook says that it’s adding new messaging response options into the WhatsApp API […] 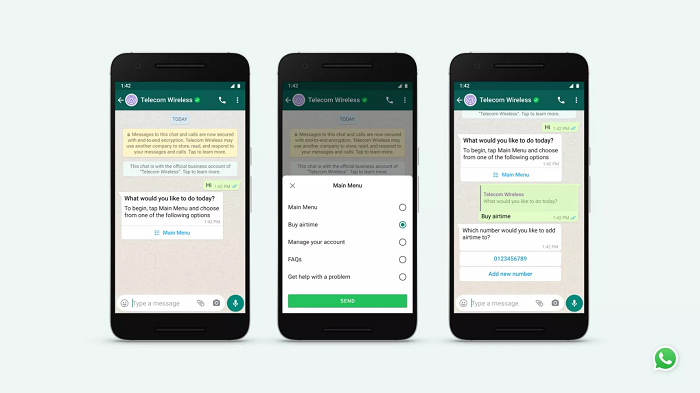