Meir Goldberg has been living in Israel for 18 years and says he would never live anywhere else.

Sitting down with Meir Goldberg, 39, was a leap back in time for me. I remember him when he was a teenager, and it was fun to catch up with him after all these years. Meir has been living in Israel for 18 years and says he would never live anywhere else. He lives with his young family in Ra’anana and enjoys going back to Michigan regularly for business and to visit family and friends.

Q: Where did you go to shul and school in Detroit?

MG: I grew up going to the Young Israel of Southfield where my father (Rabbi Elimelech Goldberg) was the rabbi and is still rabbi emeritus. I went to Yeshiva Beth Yehudah for elementary school.

Q: Did you come to Israel for the year after high school?

MG: I studied at Yeshivat HaKotel during the Second Intifada, and that year, my father led a group of young people from my community on the March of the Living. I hung out with the group, and the discussions with the kids were understandably intense. They had come to Israel straight from the gas chambers of Poland.

My great-grandmother died in Auschwitz, and my grandfather, for whom I was named, was a partisan fighter who smuggled children out of the camps. It was personal. Being with these young people who were reliving the depth of the Jewish experience made me feel even more intensely the blessing of the ground underneath me. It was a moment of awareness that my roots, my heritage, everything about me, was very much connected to this land.

Q: Tell me about your aliyah.

MG: I grew up coming to Israel regularly as a child and developed a great love for the country and the people. I never imagined, however, making Israel my home. It was after one particular trip, when I was 22, that I found myself connected to a great community of fellow Anglos. At the same time, there were tremendous business opportunities that were very attractive.

Q: After you’d been living here for a while, why did you decide to make it permanent?

MG:  The real estate market in Israel was booming. I began a business with my U.S. network, finding apartments, renovating buildings and eventually developing projects. I also met my wife who was born in England and moved here at a young age. Israel had become home, so it was natural to make aliyah officially.

MG: As much as I enjoyed real estate development, I saw the growing tech sector in Israel as an opportunity to help support the country while offering my growing U.S. network of investors real opportunities for top Israel investments.

I joined an amazing company called OurCrowd, which was focusing a great deal of talent and know-how in choosing the right startups to invest in. As we have experienced extraordinary exits, my network of investors, including back in Detroit, has grown significantly. It gives me a great excuse to come back to Detroit often and see my family and friends.

I am also very passionate about the Kids Kicking Cancer program in Israel, where I sit on the board. My dad started KKC in Detroit a number of years after my sister passed away. We have a strong program in 12 Israel hospitals but have also supplied our martial arts therapy to young trauma victims all over the country.

Q: What do you miss about living in Detroit?

MG: I miss my family. I also miss getting to see the Pistons, Lions, Tigers and Red Wings live. And Jerusalem Pizza, and not in that order.

Q: Do you have a message for anyone who is reading this in the Detroit area?

MG: Many people are challenged going a bit out of the culture that they are used to. However, when it comes to Israel, you don’t need a strong Hebrew or religious background to quickly feel enveloped by the country of the Jewish people. I love Detroit, but I know that in Israel, I am really home.

Thu Aug 19 , 2021
NEW YORK, August 19, 2021 – The Goldman Sachs Group, Inc. (“Goldman Sachs”) today announced that it has entered into an agreement to acquire NN Investment Partners from NN Group N.V. for approximately €1.6 billion1. The transaction is expected to close by the end of the first quarter of 2022, subject […] 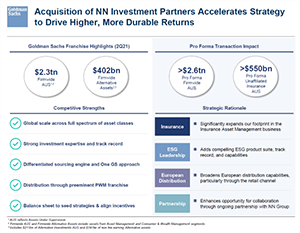