On Wednesday night, Lebanon’s Central Bank issued an announcement that seemed to finally sound the death knell on the country’s floundering economy.

Fuel subsidies, long seen as a lifeboat for the country’s growing legions of impoverished people, were halted.

While new fuel prices have not yet been set, experts expect them to quadruple, ultimately causing an inflationary shock in a country that has seen its poverty levels soar, its medicines all but disappear from pharmacies, and its electricity supplies more than halved.

Wednesday’s announcement was the watershed moment that residents of Lebanon have braced for since the start of an economic crisis in 2019.

Vehicles line up at a petrol station in the Balamand area on the coastal highway linking Lebanon’s capital to the country’s north, on June 21, 2021 amid dire fuel shortages.

As a financial tailspin burned through the country’s foreign exchange reserves, officials warned that the subsidies, which had protected the population from the full effects of the crisis, were unsustainable. But poor management of the financial collapse, which the World Bank has dubbed a “deliberate depression,” means the country is less prepared to handle the consequences of liberalization of fuel prices than ever before.

For days, the announcement was widely believed to be imminent. The Central Bank had suspended lines of credit to fuel importers and local reporting, citing unnamed officials, said that the subsidies would follow.

On Thursday, the Central Bank issued a statement standing by its decision and saying that the subsidies were being exploited by businesses. Around $800 million were paid in import subsidies in July alone, yet fuel shortages were still rampant. There is a widely held belief that importers either stockpiled subsidized fuel or smuggled it out of Lebanon to be sold at market prices elsewhere, hence making a massive profit.

A woman shops in a store without electricity due to shortages in Beirut on August 11.

The ripple effects of the decision came before the decision itself. Petrol stations across the country shuttered. Highways became clogged by long lines that snaked out of the few petrol pumps that remained open. Many bakeries have closed. Factories, including one that supplies the majority of Lebanon’s intravenous lines to hospitals, closed. They blamed diesel exhaustion.

Several towns and neighborhoods, already suffering from the effects of long outages from state electricity, lost access to diesel, which is needed to power backup generators, and were plunged into darkness. Many businesses are also considering closing shop, or have closed already, due to power cuts.

Lebanese wait to fill their gas cylinders in the southern city of Sidon, on August 10.

The effects of the Central Bank decision are only expected to worsen, and become more cross-cutting, causing disruptions to the supply of even more necessities, such as bottled water (the country does not have potable water).

“Drinking water is all about transportation. If you don’t have diesel, you can’t get water from the mountain to the coast,” said Wimmen.

A military helicopter tries to put out a fire at the port after the explosion on August 4, 2020 in Beirut, Lebanon. According to the Lebanese Red Cross, at the moment over 100 people died in the explosion and over 4,000 were injured in explosion at Beirut Port. Officials said a waterfront warehouse storing explosive materials, reportedly 2,700 tons of ammonium nitrate, was the cause of the blast.(Photo by Fadel Itani/NurPhoto via Getty Images)

A year after the Beirut blast, survivors are still grieving, still angry, and still waiting for justice

“For all merchandise that have a significant transportation element in them, prices will have to explode. The large majority of Lebanese … will get drastically poorer.”

According to the United Nations, around 77% of households in Lebanon cannot afford to buy enough food as a result of soaring food prices. The World Bank says that poverty rates exceed 50%. The UN also warns of upcoming disasters, such as the ceasing of water pumping across the country in the next few weeks. More than 71% of the country’s population is expected to lose access to safe water. A member of parliament also warned of internet outages earlier this week. Hospitals have overwhelmingly warned of being on the brink of collapse.

There are also threats to food safety. Households, restaurants and supermarkets across the country are throwing out produce that has rotted due to a lack of refrigeration. Food poisoning cases have spiked, according to local media. Earlier this week, gas importers warned of impending shortages in the product, prompting lines outside stores selling cooking gas.

An aerial view of demonstrators gathered on August 4, 2021 — the first anniversary of the blast that ravaged Beirut’s port.

A deepening political crisis compounds the effects of the economic disaster. Lebanon has been without a functioning government for over a year. Two former prime minister-designates were tasked with forming a government but stepped down after failing to break a years-long stalemate between domestic political rivals. Current Prime Minister-designate Najib Mikati says he has been making “progress” in cabinet formation negotiations, but local observers are loath to take his statements at face value. Many experts argue that the country is in the throes of a constitutional crisis, one that cannot be remedied by a new government.

Anti-establishment protesters, who have repeatedly taken to the streets since the October 2019 uprising, have rallied around calls for accountability for the August 2020 Beirut port blast, blamed largely on corruption and government neglect. Their actions have borne some fruit. On Thursday morning, a parliamentary session that was expected to pass a law shielding politicians from a probe into the blast failed to reach quorum. Widespread outrage prompted most lawmakers to boycott the session, a further sign of growing fissures in Lebanon’s political class.

Overwhelmingly the outlook for Lebanon is bleak, with few predicting the possibility of an economic or political breakthrough before the country’s parliamentary elections, scheduled for next year. In the absence of significant political change, experts say, the downward spiral will only continue.

The world must cooperate to avoid a catastrophic space collision

Sat Aug 14 , 2021
Space junk such as broken spacecraft and inactive satellites (illustration) adds to mounting congestion in Earth’s orbit.Credit: European Space Agency/SPL There’s an awful lot of stuff orbiting Earth, with more arriving all the time. More than 29,000 satellites, pieces of rockets and other bits of debris large enough to track […] 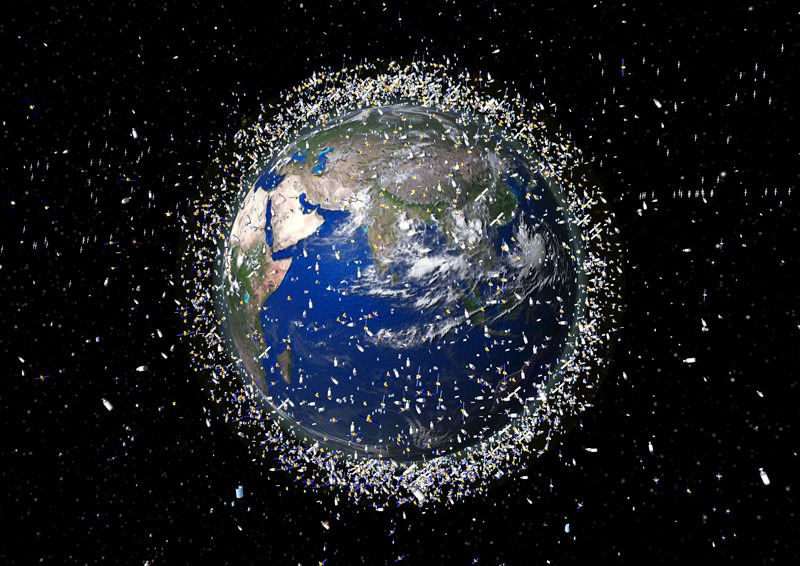