The cannabis industry continues to grow in West Michigan, and a new team headed by an Atlanta neurosurgeon soon will set themselves apart with a new venture in Grand Rapids.

Founded by Dr. Paul King, M.D., Hummingbird Labs is positioned to be what King said is the first Black-owned cannabis testing facility within the state and the fifth testing lab in operation within West Michigan.

The new facility in the works comes at a key time for Michigan’s cannabis market, which set a new statewide sales record in July of nearly $210 million in product sales as reported by the Michigan Cannabis Regulatory Agency. Of that amount, $21,121,711 came from medical products.

For King, the medical aspect of legal cannabis use became the steppingstone to Hummingbird Labs. King is a Grand Rapids native who attended medical school at the Michigan State University College of Human Medicine in East Lansing and completed his residency at Henry Ford Hospital in Detroit.

After relocating to Atlanta and establishing a general neurosurgery practice, King said his wife was diagnosed with cancer, and they decided to seek relief through different methods.

“From 2016 to 2018, my wife had become sick, and we started looking into cannabis for alternative treatments for pain and chemotherapy-related nausea,” King said. “But we had to get it from the street, and we never knew what was in it.”

King was keeping an eye on the cannabis industry in Michigan, which became legal for recreational use in 2018. He decided to join the industry and meet a demand for testing and compliance based on his medical background and his wife’s experience.

“Opening a cannabis testing lab felt like a natural fit for me,” he said.

Now, after incorporation in 2019 and prelicensure granted by the state in August 2021, a century-old building and opportunity zone at 101 S. Division Ave. in Grand Rapids will be the future home of Hummingbird Labs.

While King said property for a cannabis facility was difficult to come by, he was eager to secure the space and bring the venture back to his own community — an area with “scientific minds” and opportunities for growth.

“I grew up right down the street,” King said of the site. “We can’t do this in Atlanta, but we can do it here. I specifically chose the location on Division because I wanted to be part of the neighborhood that I grew up in, and to help bring jobs and revitalization the area.”

He is joined in this revitalization effort by co-founder Glen Canton, a Muskegon native with more than 30 years of corporate experience in sales, marketing, corporate training/facilitation and business management.

Clanton obtained a Bachelor of Arts in Business Administration from Michigan State University and met King at an alumni function. King had started to think about retirement and what the next phase of life would entail and told Clanton about his interest in the cannabis market.

Clanton, who had launched a business coaching firm called Do Something Solutions, decided to team up with King to develop a strategic plan to bring Hummingbird Labs to fruition.

“Hummingbird Labs is Paul’s vision, and I’m trying to help that vision become a reality,” Clanton said. “We’re listed as co-founders, but my role is to help him put the pieces together, identify how the pieces might work together and move forward to get the actual operations up and running.”

Once fully operational, Hummingbird Labs will offer full compliance cannabis testing for growers and processors. Clanton said the process will involve collecting samples and running tests for three to five days to make sure the cannabis is safe for consumption.

This designation is to be determined by the Michigan Cannabis Regulatory Agency standards. Along with these standards, the Michigan Medical Marijuana Act of 2008 (MMMA) and the Michigan Regulation and Taxation of Marihuana Act of 2018 (MRTMA) mandate all legal cannabis products be tested to determine potency and to ensure product safety.

“We’re looking for potency as well as contaminants that might be in the product,” Clanton said.

What the team at Hummingbird Labs will offer as a Black-owned testing facility in Michigan is something unique. Under the MRTMA, the state’s Social Equity Program seeks to encourage participation in the cannabis industry by people from communities impacted by marijuana prohibition and enforcement.

Cannabis vendors can earn credits through the program by doing business with minority-owned companies, which is where Hummingbird Labs comes into play.

“It’s kind of a win-win situation for everyone involved,” Clanton said.

Clanton also said the demand for lab services currently exceeds the supply within West Michigan, leading to a supply chain issue within the industry as growers and processors are unable to bring products to the market until they are tested.

The team hopes to meet that need and also provide more educational opportunities for the community.

“Our goals are to keep the public safe and to educate the public so that people in the community can learn some of the chemistry and the science related to marijuana,” King said. “In addition, we want to establish relationships with the entire community and try to destigmatize marijuana while advocating for the industry.”

Eventually, King said he would like to pursue more research and development opportunities related to cannabis in the future.

For now, he and Clanton will focus on launching the testing lab with the help of their advisory board and fellow founding member Paul King II, King’s son. The younger King brings more than 20 years of corporate experience in financial and business analysis and holds a degree in chemical engineering from Tuskegee University.

Paul King also said his other two sons and his sister are partners in the Hummingbird Labs venture.

The team currently is at work with architects to identify how the lab’s space will be laid out and with vendors to evaluate equipment needs. According to King, Hummingbird Labs is offering investors an opportunity to be a part of its vision and dream by investing in its Mainvest capital campaign to build out the facilities, purchase equipment and maintain general operations.

King said his goal is for the building to be complete by the end of this year so that Hummingbird Labs can become fully operational at this time in 2023.

“It’s exciting to be involved in a new industry and to help it grow,” King said.

Mon Sep 5 , 2022
A senior official with the World Economic Forum says Canada should be talking about more important things than conspiracy theories targeting his organization. Adrian Monck, managing director of the WEF, also argues that politicians espousing those theories should ask themselves whether they’re spreading disinformation coming from bad actors. “Canada should be talking about […] 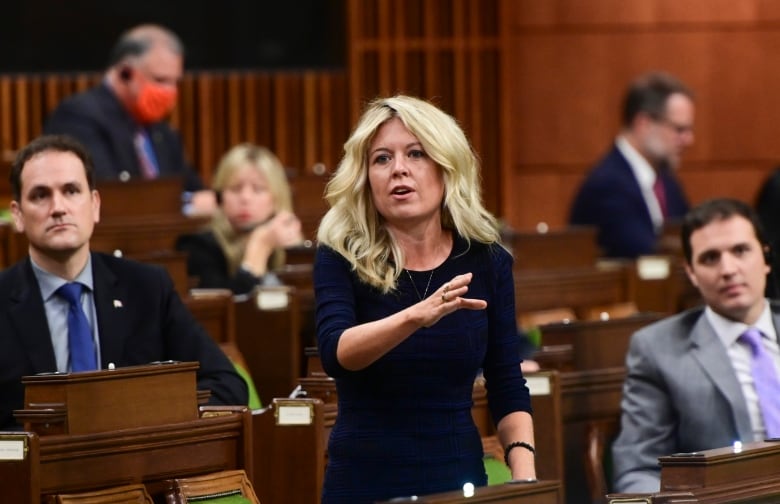