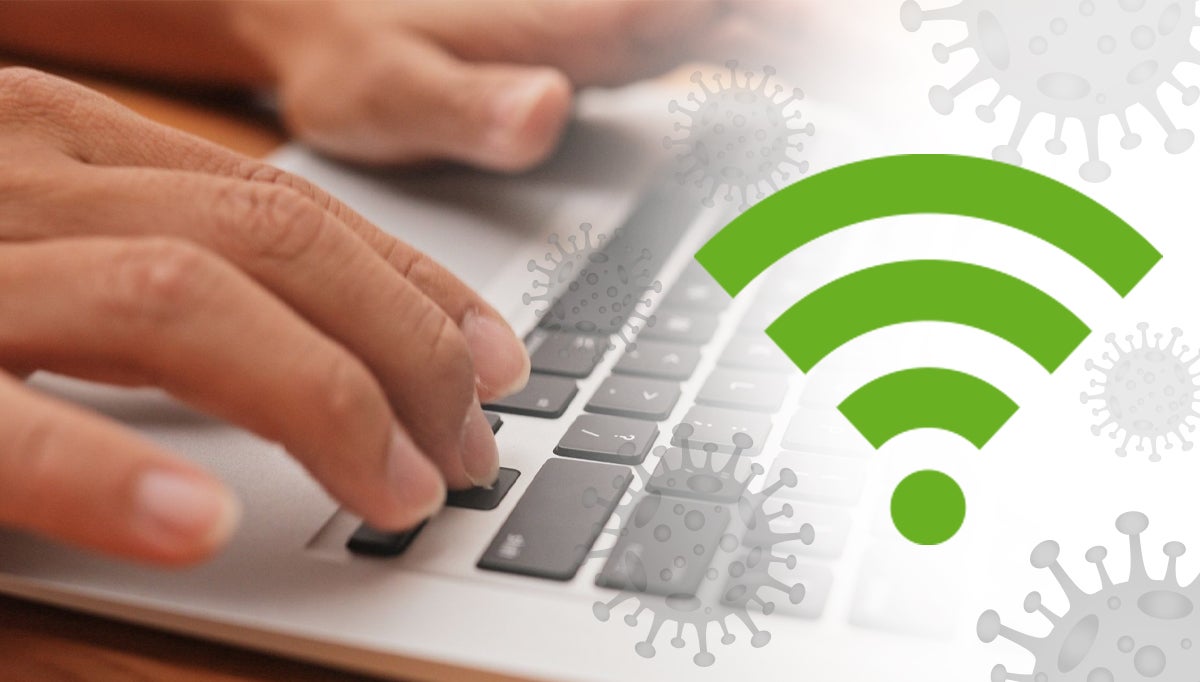 MANILA, Philippines—Internet, or broadband connection, has become one of the most sought after services since the global health pandemic pushed many Filipinos to stay and study or work at home.

While the government and ICT service providers proclaim improvements in internet connection speeds, many complaints persist.

Among these are claims that costs of ICT services in the Philippines are among the highest in Asean.

But what is really the situation on ICT in the country?

Reports from the country’s biggest telecommunication companies showed that the number of broadband subscribers grew during the COVID-19 pandemic. 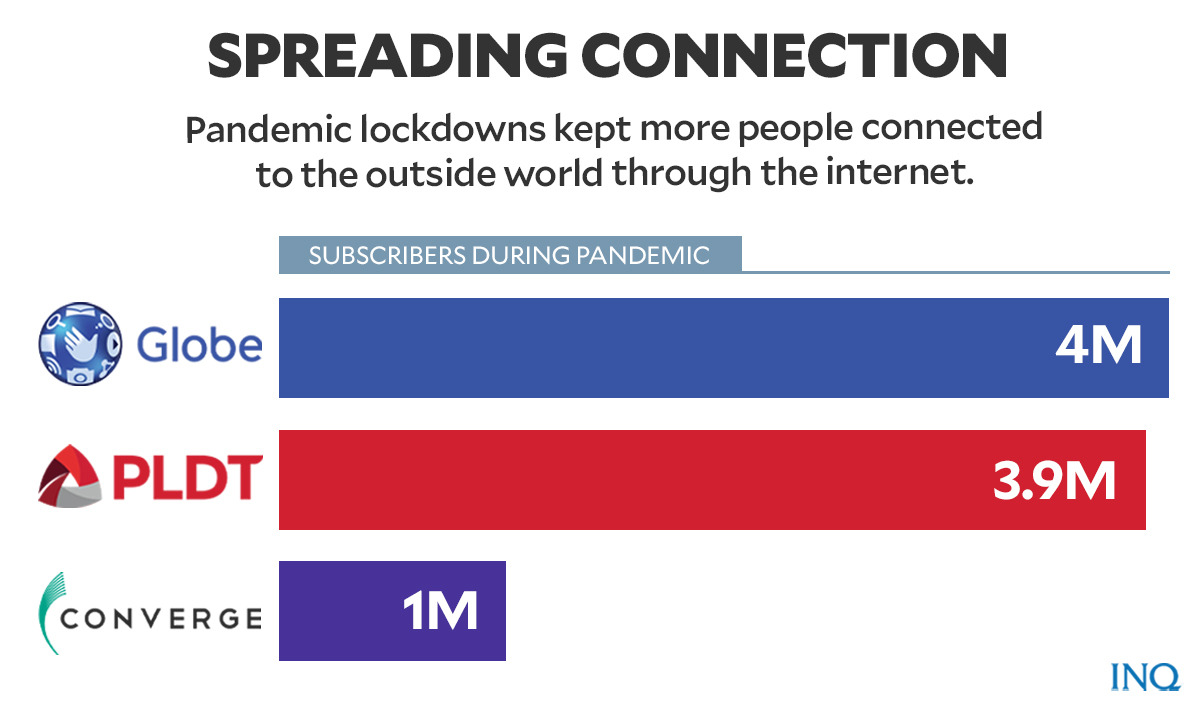 The company said it is 81 percent higher than last year’s figure.

The milestone was made possible, according to Globe Telecom, by the expansion of the “sustained fixed wireless broadband users’ expansion” which increased by 105 percent compared to last year.

PLDT also declared that it has expanded its fiber-to-home network footprint with 3.9 million broadband subscribers as of April.

“This pandemic has made the Internet an essential for millions of Filipino families,” said a PLDT statement quoting Butch Jimenez, SVP and head of PLDT Home Business.

Since the government implemented strict measures to control the spread of COVID-19, several companies shifted to a work-from-home setup.

The Philippines saw a further improvement in its average internet speed for May, according to Ookla’s Speedtest Global Index.

From 46.25 megabits per second (Mbps) in March, the country’s average internet download speed for fixed broadband shot up to 49.31 Mbps in April.

From 49.31 megabits per second (Mbps) in April, the country’s average internet download speed for fixed broadband shoot up to 58.73 Mbps.

Of the total 180 countries analyzed by the international internet speed monitoring firm, the Philippines ranked 65th – 15 places higher compared to its previous ranking.

Following the President’s order, NTC said there has been an increase in the issuance of permits from July 2020 to March this year.

How much does it cost to ‘connect’?

In the Philippines, people pay an average of $53.71, or P2,582.25, per month to connect to the virtual world online – according to a survey by consumer comparison website Cable.co.uk released earlier this year.

It is lower than the global average cost of $78.14 in 211 countries. In terms of global ranking, the Philippines was 199th in internet connection cost. 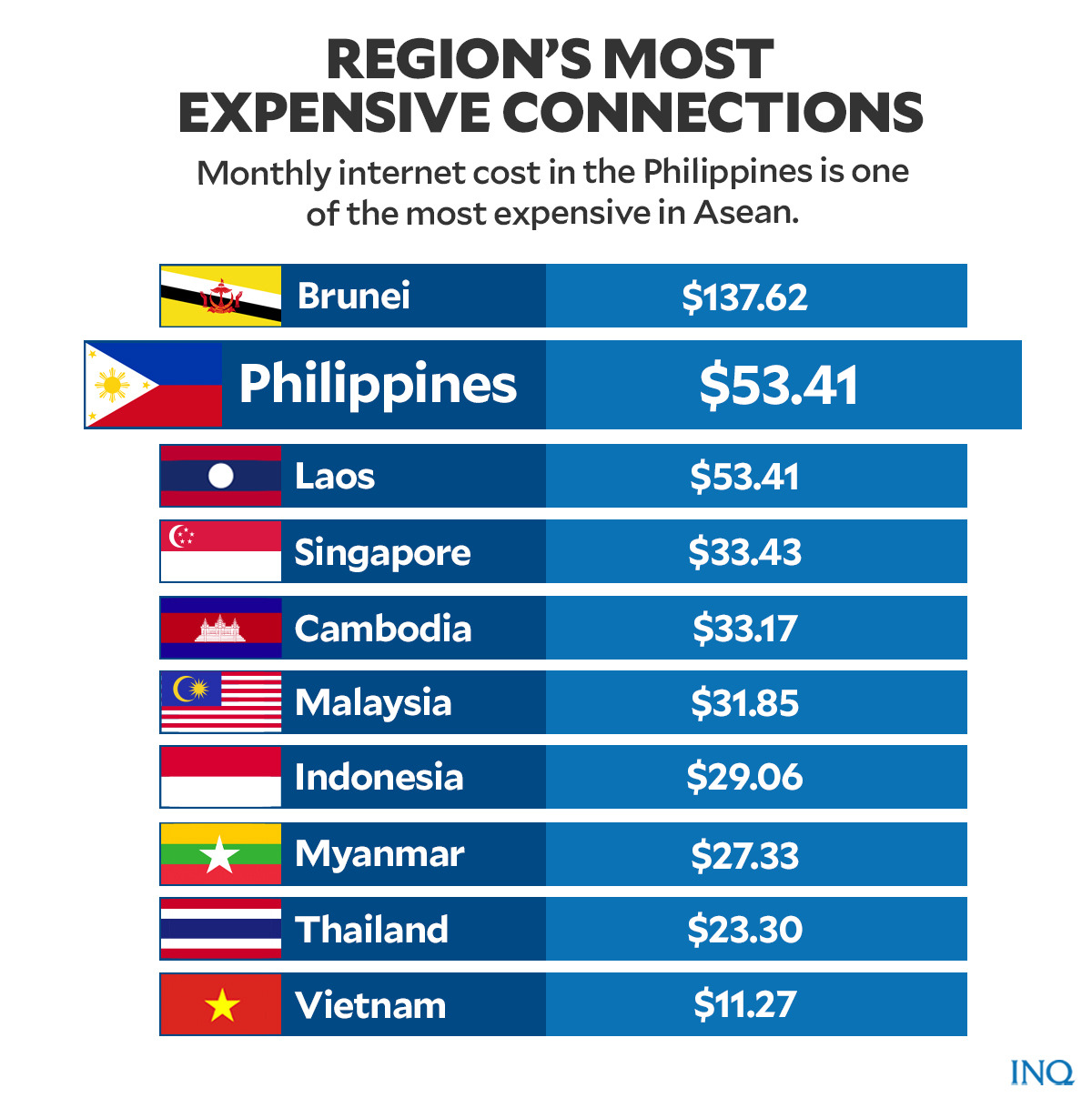 However, the UK-based technology website noted that the $53.71 average monthly cost for the Philippines in 2020 is higher than its 2019 average of $39.29. Other countries also saw an increase in their average monthly broadband cost.

Among Asean countries, the Philippines along with Laos had the most expensive broadband fees per month next to Brunei.

In Vietnam, the average cost of broadband per month was only $11.27, the cheapest among the 10 countries.

Research firms Hootsuite and We Are Social, in their Digital 2021 report, said that there are a total of 73.91 million internet users in the Philippines as of January 2021. 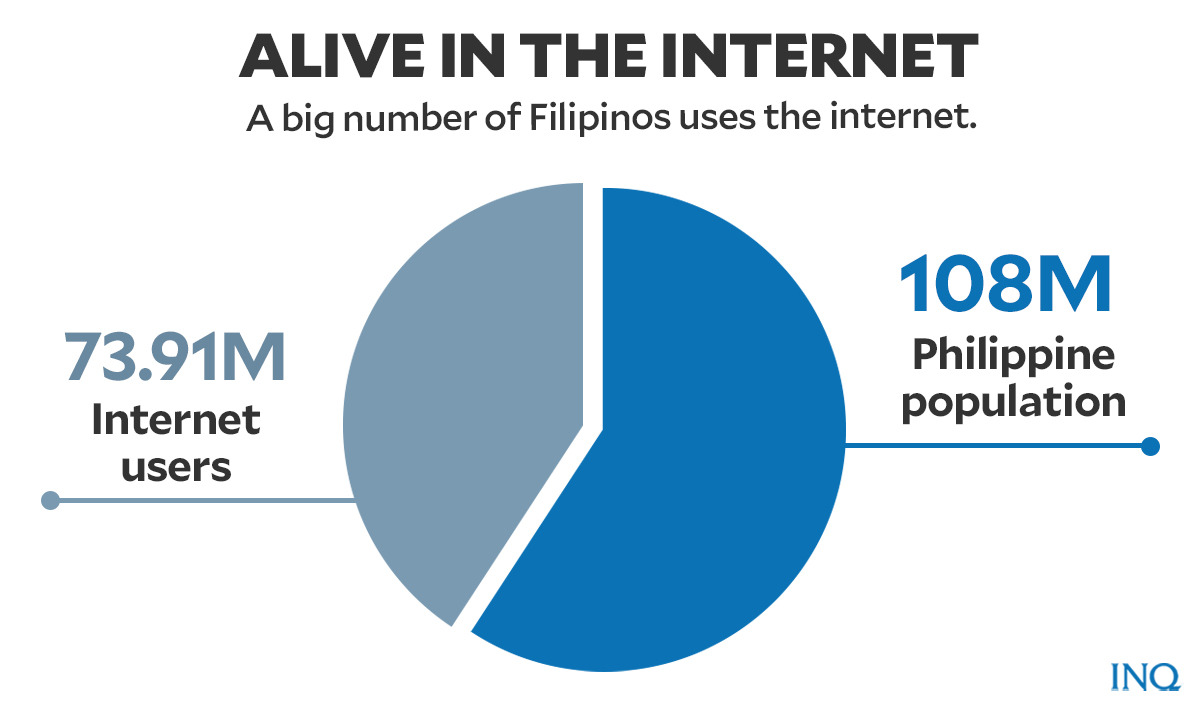 The numbers showed a 6.1 percent increase compared to the same period last year. It also represents 67 percent of the country’s total population.

Internet users aged 16 to 64 years old were also found to spend an average of 10 hours and 56 minutes on the internet daily via any device.

This is longer compared to 2020’s data which recorded only 9 hours and 45 minutes.

The 2021 report also revealed an increase in the worldwide average of internet use to 6 hours and 54 minutes from last year’s estimate of 6 hours and 38 minutes. 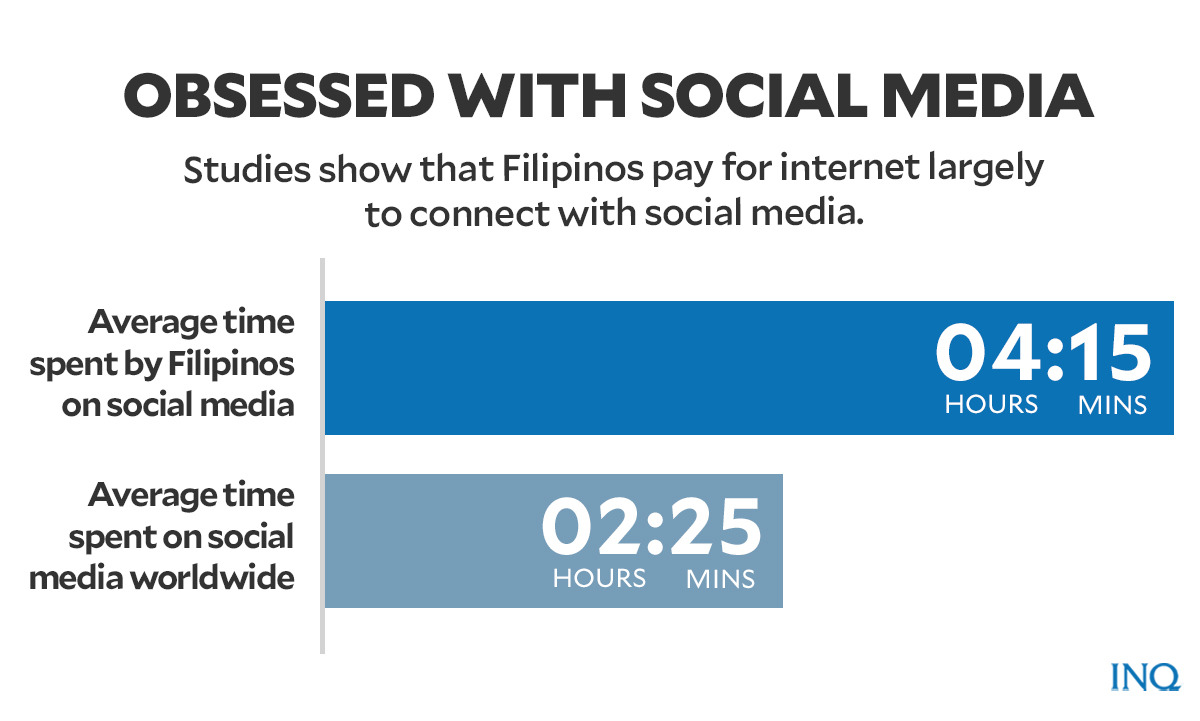 Based on the report, Filipinos spend the most time on social media, averaging 4 hours and 15 minutes, while the average time spent worldwide is only 2 hours and 25 minutes.

Last year, a separate report released by online marketplace OnBuy.com showed that Filipinos spend an average of 102,054 hours or 4,252 days during their lifetime on social media platforms.

Among the 45 countries included in the report, the Philippines was hailed as most obsessed with social media.

Out of 45 countries, PH ranks first as most obsessed with social media

Interestingly, the study stated that 57.6 percent of Filipino internet users use social media for work purposes.

Among the most-used social media platforms were:

Meanwhile, the other online content activities among Filipinos include:

The report likewise detailed the top websites by traffic based on traffic volume in December 2020 from data collected by Semrush, Similarweb, and Alexa.

For the celebration of the National ICT Month this year, the Department of Information and Communications Technology (DICT) said it is preparing the country for its participation in the global digital economy.

In a statement, DICT Secretary. Gregorio “Gringo” Honasan said his department is adopting the CHIP framework or Connect, Harness, Innovate and Protect.

This was designed to “implement plans, programs and initiative aimed at accelerating digital transformation to strengthen the country’s digital economy in the new normal,” Honasan said.

“Through this framework, we shall strive for our economy to come out of the new normal stronger and more promising than before,” he said.

Last February, Honasan said the DICT and National Telecommunications Commission (NTC) met twice per month to check on the status of their network rollout plans and “to address any problems that may cause lags in its implementation.”

“Our vision of digital transformation will be realized if all Filipinos, regardless of who they are and where they are in the country, have quality access to internet connectivity services at affordable prices,” he said.

The DICT added that it is working together with NTC to ensure that telecommunication companies would complete their rollout infrastructure plans.

During the same month, the DICT announced that it will roll out free Wi-Fi sites and very small aperture terminal (VSAT) facilities in the provinces of Basilan, Sulu and Tawi-Tawi to help remotest parts of Mindanao have free internet access amid the new normal.

In April, the department has also expressed its support for Senate Bill No. 2092 which seeks to amend Republic Act No. 7925, or the Public Telecommunications Policy Act of the Philippines.

Under the DICT-supported Senate bill, telecommunications and service providers will be required to refund customers for service outages and interruptions which will last 24 hours or more “on a prorated basis.”


For more news about the novel coronavirus click here.

What you need to know about Coronavirus.

The Inquirer Foundation supports our healthcare frontliners and is still accepting cash donations to be deposited at Banco de Oro (BDO) current account #007960018860 or donate through PayMaya using this link .

Don’t miss out on the latest news and information.