Central bankers will convene virtually this week to discuss an “uneven economy,” which could ignite a debate on the Federal Reserve’s policies as they relate to racial inequality and climate change.

The Fed’s annual Jackson Hole Economic Symposium is set to kick off on Thursday with the theme: “Macroeconomic Policy in an Uneven Economy,” a departure from the vague themes of years’ past (i.e. “Implications for Monetary Policy” and “Challenges for Monetary Policy”).

In dedicating its hallmark conference (moved to a virtual format this year due to COVID-19 concerns) to the economic divide, the Fed hopes to emphasize its new framework. At the central bank’s Jackson Hole conference last year, the Fed changed its monetary policy approach to prioritize getting the economy as close as it can to maximum employment — even if inflation rises above its 2% target.

“They could have made this year’s theme on the average inflation target, and they chose to go with employment,” said Claudia Sahm, a former Fed economist. Sahm, now a senior fellow at the Jain Family Institute, told Yahoo Finance that the themes of these conferences tend to be carefully deliberated.

Fed Chairman Jerome Powell has frequently referenced the later stages of the post-financial crisis recovery, pointing out job gains among low-income, Black and Hispanic households as a benefit of running easy monetary policy for longer.

“These developments underscore for us the importance of sustaining the expansion so that the strong job market reaches more of those left behind,” Powell said in 2019, just before the COVID crisis.

Benjamin Dulchin, the director behind the Center for Popular Democracy’s Fed Up campaign, says the Fed’s willingness to discuss an uneven economy is “refreshing.”

Fed Up, a common sight at Jackson Hole conferences of years’ past, wants the central bank to go beyond acknowledging disparities in the economy. As Fed officials start to consider slowing monetary stimulus, the activist group does not want the Fed to drive the labor market back to pre-pandemic shape — it wants the Fed to shoot for a labor market recovery even better than that.

Dulchin, who won’t be able to send his team to Wyoming because the conference is now virtual, told Yahoo Finance his message for the Fed: “It’s great that you’re noticing it, but what are you going to do about it?”

The focus on an “uneven economy” could also serve as a segue to the Fed’s emerging work on climate-related risks, which Fed Governor Lael Brainard has called attention to in recent years.

The Fed has floated the idea of a “scenario analysis” that would examine the ability of individual firms and the financial system at large to handle different hypothetical climate shocks.

But Fed officials may face pressure to do more. Another activist group, the environmentalist organization 350.org, was also planning a rally at the conference in-person. The group accuses the Fed of enabling the banks that it regulates to finance fossil fuel industries, and is also calling on the Biden administration to replace Powell with a “climate champion” when his term expires in February 2022.

For his part, Powell has made it clear that the Fed wants to examine climate risks as it relates to financial risks to the economy at large, adding that the central bank’s independence requires it to stay away from public policy choices that fiscal bodies (like Congress) may better address.

“We are not, and we do not seek to be, climate policymakers,” Powell said in June.

Still, climate remains a thorny topic even on the other side of the political spectrum. GOP Senator Pat Toomey of Pennsylvania alleges the central bank is veering from its congressional mandates in “publishing politically-charged research” on topics like global warming and racial justice.

It is unclear to what extent Powell will address these issues in his speech on Friday. The Fed has said the speech will be on the broad subject of the “economic outlook,” which will likely perk the ears of Fed watchers eager to hear any commentary on the Fed’s possible plans on tapering.

As far as the “uneven economy,” Sahm said Powell’s speech could certainly connect back to the theme, but suggested the paper presentations may be bolder in addressing the topic.

“I would watch the [papers] because that’s where they’re going to bring the fire,” Sahm told Yahoo Finance. “The chair’s speech, the Fed, does not want to surprise markets.”

Brian Cheung is a reporter covering the Fed, economics, and banking for Yahoo Finance. You can follow him on Twitter @bcheungz.

Mayim Bialik will fill in as a ‘Jeopardy!’ guest host. 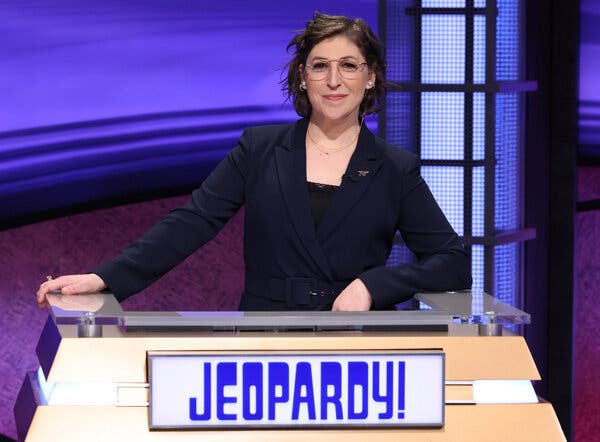