Joe Biden has put the bravest face possible on the bloody and chaotic US withdrawal from Afghanistan, defending his move to end a 20-year conflict that dogged three of his predecessors as an act of political courage.

“I believe this is the right decision, a wise decision, and the best decision for America,” the US president said at the end of his White House speech on the pullout on Tuesday.

But the circumstances of the withdrawal have become an unexpected political liability for Biden, with the Taliban conquering the country, a deadly terrorist attack in Kabul this week and a frenzied rush to evacuate tens of thousands of people before his August 31 deadline.

Republicans have been sharpening their criticism of Biden’s handling of the crisis, in the hope that they can wield it as a weapon in their attempt to retake Congress in next year’s midterm elections. Meanwhile, some moderate Democrats in battleground states and districts have become anxious about their prospects and sought to distance themselves from the president.

“In general, elections will be decided on the economy and the pandemic, and Afghanistan will seem like a long time ago and place far, far away, so it may have no impact on him,” said Mark Rom, a political-science professor at Georgetown University. “But Republicans will try to make the impact as large as possible.”

The withdrawal from Afghanistan has been a pillar of Biden’s foreign policy vision for years, and until recently it did not seem to carry much political peril. Widely backed in opinion polls by war-weary US voters the pullout was supported by former president Donald Trump and many other Republicans, as well as most Democrats, before Biden took office.

According to a poll conducted by Morning Consult before the terrorist attack in Kabul, 50 per cent of Americans agreed with the decision to withdraw versus 39 per cent who did not.

White House officials and many Democrats on Capitol Hill hope and believe that despite the turmoil and bloodshed of the past few weeks, Biden’s decision will still be rewarded by American voters.

“Leaving Afghanistan is most importantly a policy win for the country, but it is also a political winner with the American public,” said Chris Murphy, the Democratic senator from Connecticut and a member of the Senate foreign relations committee. “In the end, the American public wants this president to focus on them, not on the Taliban.”

But the exit from Afghanistan — which has coincided with the surge of the Delta coronavirus variant — has contributed to a sharp fall in Biden’s approval ratings over the past month.

On August 1, when the Taliban had yet to capture a single provincial capital in Afghanistan, 51.3 per cent of Americans approved of Biden’s job performance, compared with 43.5 per cent who disapproved, according to the Real Clear Politics average.

By August 30 there had been a dramatic turnround: 48.7 per cent of Americans disapproved, while just 46.8 per cent approved. Biden now has lower approval ratings than every postwar US president apart from Donald Trump, Bill Clinton and Gerald Ford after 224 days in office, according to FiveThirtyEight.

“Americans probably want to wind down in Afghanistan, but at the end of the day they don’t want to be losers to the terrorists. In my judgment this is an unconditional surrender to the Taliban,” said Michael McCaul, the Texas Republican who is the party’s top member of the foreign affairs committee in the House of Representatives.

McCaul and other senior House Republicans have called for the Biden administration to preserve documents related to the Afghan pullout, in preparation for possible congressional inquiries.

Any such grillings would be even more intense if the Republicans regain control of the lower chamber of congress next year. During the Obama administration, congressional investigations into the deadly 2012 attack on US diplomats in Benghazi, Libya, dogged the White House and Hillary Clinton, the secretary of state, for months. The attacks were still a rightwing talking point when Clinton ran for president four years later.

McCaul said congressional hearings should focus on “how could this have happened and why did it go so bad”, adding: “Back home, this is not just a news cycle issue, it is the issue, and it is resonating very strongly and I don’t think it’s going to go away any time soon.”

Some members of Biden’s own party, particularly those in battleground states, have distanced themselves from the administration’s handling of the Afghanistan pullout.

Susan Wild, a House Democrat from Pennsylvania, said the “evacuation process has been egregiously mishandled”, and called for “answers and accountability from the administration”, although she said she agreed with the decision to withdraw from an “unwinnable war”.

“Our troops deserve nothing less than a complete and unvarnished account of the truth,” Wild added.

Some Democratic strategists fear Republicans will try to criticise the White House on several fronts. One attack is expected to centre around last week’s US troop deaths, and the renewed terror threat in Afghanistan. Another will focus on the failure to extract all vulnerable Afghans and US citizens.

Even though it may seem inconsistent with concern for those left behind in Afghanistan, the stream of refugees coming to the US following the withdrawal might also emerge as a flashpoint.

“I hope I am wrong and that major Republicans will resist the worst, most racist impulses of their base, but there is nothing in the last few decades to suggest that will happen,” Dan Pfeiffer, the White House communications director under Barack Obama, wrote in his newsletter this week.

Despite nervousness among some Democrats, the progressive wing of the party is elated by the Afghan withdrawal in a way that could help ease some of the strains with the White House on other fronts such as the stalled effort to advance voting rights. 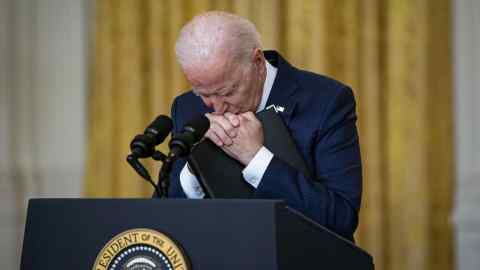 “[Biden] just gave one of the most compelling cases against war that I have heard any president in recent history give,” Pramila Jayapal, a leftwing Democrat from Washington state, wrote in a tweet after the president’s remarks on Tuesday. “A courageous, thoughtful, comprehensive and necessary articulation.”

Some political analysts say Democrats are likely to stress that whatever the criticism of Biden’s handling of the withdrawal, a continued presence in Afghanistan was far more dangerous — both politically and for US troops.

“The counterfactual is even worse . . . the alternatives paint an even harder picture,” said Eric Schultz, a former aide to Barack Obama and founder of the Schultz group, a consultancy.

Murphy said he expected Americans to accept that the exit was always going to be messy: “There’s a narrative that does seem to be dominant out there today, suggesting that we could have left Afghanistan in the wake of the overnight collapse of their government and military, in a neat and clean way.”

“There’s no doubt that this could just could have been done better, but I don’t think there was any way for us to avoid the scenes of confusion,” he added.

Video: Highlights of an FT subscriber webinar on Afghanistan
Next Post