Get the newest photos, videos, stories and more.

Kansas City Southern has asked the Surface Transportation Board to reject a request from Canadian Pacific for information it seeks for CP’s efforts to merge with KCS, saying that under the termination of the merger agreement between the two railroads, CP no longer has any right to the information. KCS also says CP should return information it received while the two railroads were jointly preparing a merger application. CP, which continues to maintain the merger with Canadian National that KCS chose to pursue will not withstand regulatory scrutiny, plans to continue to pursue approval of a CP-KCS union. “No precedent supports CP’s audacious request,” KCS wrote in its filing with the STB. “… There is no legal or policy basis for the Board to compel KCS to assist CP in its hostile application.”

An Iowa man has been fined $80,000 for burning some of an estimated 30,000 railroad ties on his property after being told the burning was illegal. The Iowa Attorney General’s office reported in a press release that John Goldsmith of Sergeant Bluff, Iowa, was fined the maximum amount possible and given a permanent injunction against violating solid waste and open-burning laws by Judge Duane E. Hoffmeyer of the state’s Third Judicial District. Goldsmith, who said he had barricaded his property to prevent authorities from entering, and threatened to turn loose three pit bulls on anyone who attempted to fight the fire, received the maximum penalty to “punish financially a seemingly indifferent, confrontational behavior,” the judge said in his ruling.

Tue Jun 22 , 2021
Follow coverage of trans issues, and you’ll hear some people say that teens who change their gender identity are participating in a fad, and that social media is the culprit. As one proponent of legislation that would restrict access to care for trans teens claimed, social media platforms are where […] 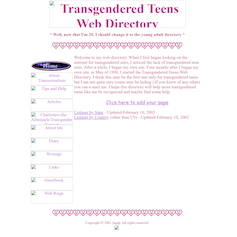