China’s zero-Covid strategy of endless testing and lockdowns has hammered its economy and taken a toll on company profits, but it has delivered a windfall for test makers.

Twelve of China’s top Covid testing firms have recently posted huge increases in both revenues and net profits for the first half of this year.

Andon Health, which supplies Covid test kits both at home and abroad, reported that its net profit skyrocketed by 27,728% in the first six months of 2022, reaching 15.24 billion yuan ($2.2 billion). It was the biggest increase recorded by any listed company in mainland China.

The company benefits not only from China’s aggressive testing campaign at home, but also from huge demand in the United States, as its iHealth Lab had recently won US government contracts for supplying antigen rapid tests.

Assure Tech, a Hangzhou-based diagnostics firm, also posted a 1,324% increase in net income because of strong demand in the global Covid testing market.

Other test makers recorded net profit increases from 55% to 376% for the first six months of the year.

Endless Covid testing, back-and-forth government-enforced lockdowns, and border restrictions have wreaked havoc on China’s economy. GDP grew only 0.4% in the second quarter, the slowest pace in more than two years. Major investment banks have slashed their full-year growth forecasts for China to 3% or under, sharply lower than the 5.5% official target set by the government earlier this year.

But the diagnostic firms are one of the biggest moneymakers during the pandemic, benefiting from enormous demand for testing as Beijing sticks with its zero-Covid policy that involves forced quarantines, mass mandatory testing, and snap lockdowns.

From the beginning of the pandemic through April 2022, 11.5 billion tests had been conducted in China, according to the government.

That figure may have significantly increased since then, as analysts from Soochow Securities recently estimated that 10.8 billion tests had been conducted in the three months from April to June.

The costs may be a big burden on the Chinese government’s finances, which have already taken a hit from collapsing property sales. In May, officials in Beijing made it clear provincial and city governments had to bear the costs for regular Covid testing.

Assuming big Chinese cities that account for 30% of the population conduct Covid tests twice a week, the direct cost of testing may total 200 billion yuan ($30.1 billion) from May to the year’s end, according to an estimate by Goldman Sachs earlier this year.

The number could rise further if the remaining 70% of the population is tested and costs of setting up testing sites and quarantine centers are taken into account, Goldman Sachs said.

Fri Sep 9 , 2022
The world’s second biggest economy is grappling with the impact of severe drought and its vast real estate sector is suffering the consequences of running up too much debt. But the situation is being made much worse by Bejing’s adherence to a rigid zero-Covid policy, and there’s no sign that’s […] 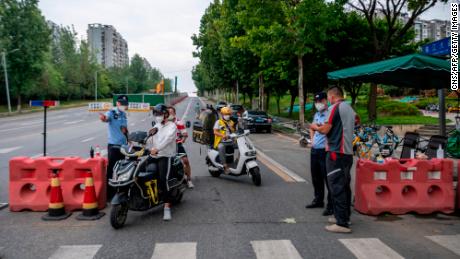