Thailand risks fueling its decade-high unemployment rate and household debt with the imposition of lockdown-like measures to contain the deadliest Covid outbreak to hit the nation.

The greater Bangkok area, accounting for about 50% of Thailand’s gross domestic product, will shutter shopping malls, spas, massage and beauty clinics for at least two weeks starting Monday. A mandatory work-from-home rule for most government employees, overnight curfews and curbs on domestic travel are set to hurt retailers, airlines and restaurant operators, already reeling from some form of Covid restrictions for more than a year.

Thailand is tightening restrictions to stem the spread of the more contagious delta variant of Covid that’s also fueled a surge in cases from Indonesia to Vietnam, and scuppered their plans to open up borders. The latest measures may further delay the Thai economy’s recovery from its worst slump in more than two decades and derail Prime Minister Prayuth Chan-Ocha’s target to welcome back vaccinated tourists by as early as mid-October.

“The economic hit will be increasingly bigger with each lockdown even if the length of the lockdown is the same,” said Maria Lapiz, managing director of Maybank Kim Eng Securities Thailand. “This is because many companies are already nearing the end of their tether after so many months of ever-shrinking revenues and stubbornly high cost of existence.”

Here’s a look at what the latest Covid restrictions mean for the Thai economy:

Even before the announcement of the latest measures, Thailand’s central bank saw “significant downside risk” to its current 1.8% economic growth forecast for this year, saying a prolonged outbreak will squeeze business liquidity and hurt employment in the services sector. It expects the economy to return to pre-Covid levels only in early 2023 if herd immunity is delayed to the end of next year.

On Monday, the Bank of Thailand said it may slash its 2021 GDP forecast to factor in the worsening Covid outbreak, and will closely monitor the situation to see whether additional policy measures are required. 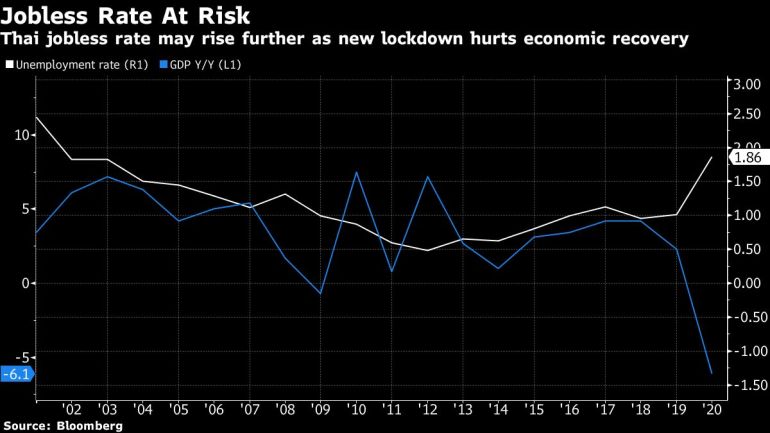 “While expectations were that this year would provide breathing room for the economy owing to vaccine availability, the economic impact is likely to mount until the rollout reaches critical mass,” Rao of DBS Bank said. “Rebound expectations hinge on public spending and exports, while a weak consumption clouds private sector investment trends.”

The jobless rate is likely to rise from 1.96% at the end of the first quarter, the highest level since 2009, as more people will probably lose their jobs with a prolonged outbreak and curbs on businesses. The hit to the services industry in cities may drive more people into agriculture, a trend seen during a nationwide lockdown last year.

The Bank of Thailand last month predicted a “W-shaped” recovery in the labor market, slower than the past rebounds because of what it calls deep scars in the fragile services industry.

Thai household debt, which surged to an 18-year high of 90.5% of GDP, may further rise given the loss of jobs and income due to the tightening restrictions. That will seriously dent consumer spending, a key engine of economic growth.

Thailand has distributed about 12 million doses of vaccines, enough to cover about 9% of its population, ranking the country behind more than 120 other territories in inoculation rates. The government needs to ramp up vaccinations and consider spending the bulk of a planned 500 billion baht borrowing plan “to secure more quality vaccines rather than compensating those affected groups and stimulating economy,” according to Kampon Adireksombat, deputy managing director at SCB Securities’ Chief Investment Office. 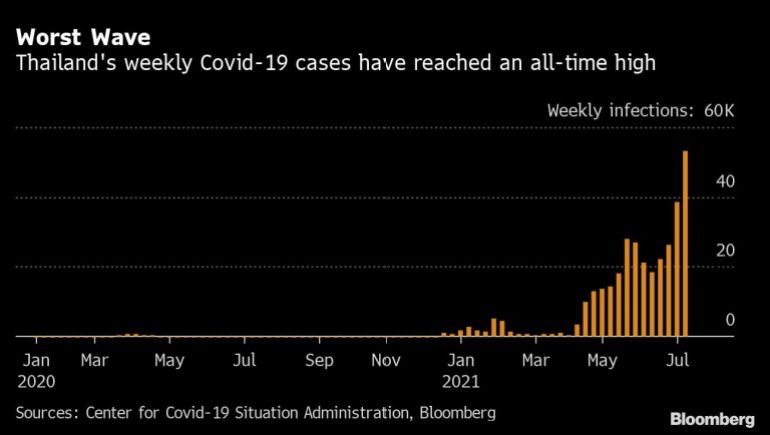 “If we lock down without ramping up vaccinations, new cases may temporarily drop before rising again,” Kampon said. “We will be in the ugly cycle of lockdowns and compensation. This will hurt the economic outlook next year.”

Investors have already borne the brunt from the worsening pandemic in Thailand, with the nation’s currency and stocks both tumbling for four weeks in a row. While a strong dollar has contributed to the baht slumping to a near 15-month low, stocks have suffered from foreign investors pulling out a net $2.6 billion so far this year.

Earnings of consumer goods companies, retailers, airlines, hotels and shopping mall operators may be hurt by a weak economy and continued restrictions, while the baht may be more influenced by the U.S. dollar.

“Foreign investors are likely to avoid high-risk emerging markets including Thailand,” SCB’s Kampon said. “The baht will remain weak and the central bank will only step in to curb excessive moves. But it should be good for exports, which should support the economy.”

Mon Jul 12 , 2021
Former CIA Station Chief and Fox News contributor Dan Hoffman on how the Biden administration can combat recent cyber attacks, arguing ‘we need to take the fight to the enemy.’ Ransomware has become a business. And that’s having an impact on companies that provide cyber insurance. The cyber insurance industry […] 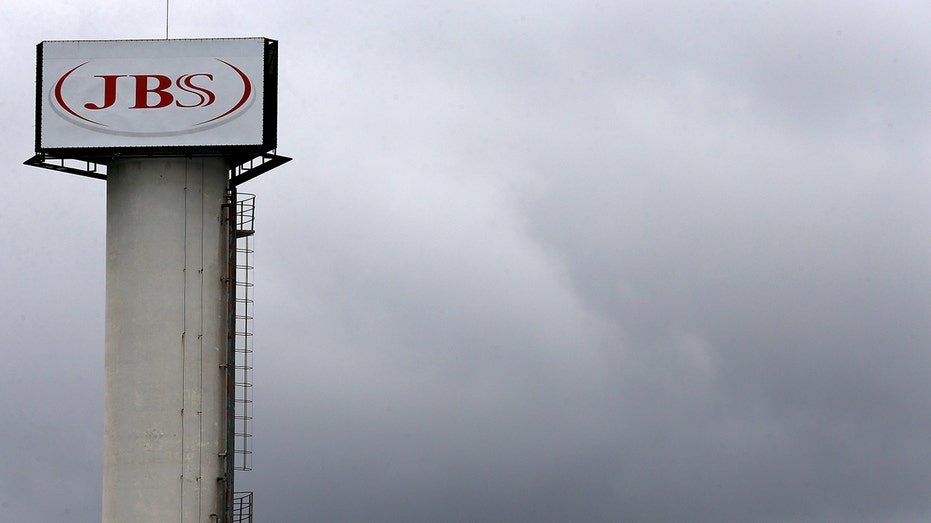